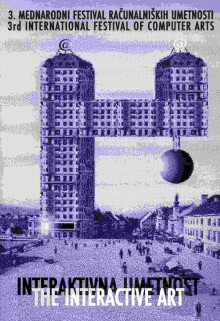 Bearing in mind the importance of documentation and archiving of new media arts material, Jože Slaček, the MFRU festival’s founder and co-organizer, takes a detailed care of collecting and archiving festival’s material. Most special concern was dedicated to collecting and presentation of material for the 15th MFRU when a MFRU hyper film – the first Slovenian interactive documentary, exceptional also at a world level – was produced. Beside film, Jože Slaček arranged an archive with physically stored material from previous years, which is regularly being updated with material from current festivals.

Setting up physical and virtual archives is necessary for the process of reflection upon contemporary artistic production. Archive’s assembling, its accessibility and, above all, practical utility, are still not emphasized enough. This holds true especially for works based on the use of modern technology, since over the last years, we have been facing their impetuous development which simultaneously brings along recurrent modifications of formats, standards and programming languages.

The functional implication of the MFRU archive is stimulating research, educational and documentary use of existing material while constantly upgrading it with new projects without discarding the old.

Jože Slaček, a creator in the sphere of video, animation and multimedia, as well as the initiator of the International Festival of Computer Arts in Maribor. He is regularly carrying out activities associated with intermedia arts; he organizes lectures, screenings, exhibitions and festivals. He worked as a producer and curator of the project Nano Art, implemented under the EPK2012 Maribor, and is also as a co-producer of the exhibition Museum of robots in the Maribor Art Gallery (UGM) and in the A+A gallery.