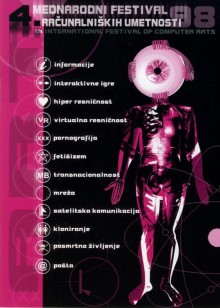 The MFRU festival’s documentary references and archives are available in modern media in the form of a hyper film; the latter can be obtained on a DVD carrier, on the festival’s homepage, as well as in reference and university libraries, New Media departments and in archives of contemporary art.

MFRU hyper film is a group project designed by authors from Maribor, Ljubljana and Beograd; through the development of film logics and editing, it stretches over the boundaries of linear structure and opens new doors to story evolvement in the film medium. By being transferred into a virtual world and integrated into a network and inter-hyperactive environment, the MFRU hyper film connects all hitherto participators of the festival.

It serves as an organized archive and website database, offering connections to participating artists and events. This multimedia documentary collage is accessible, open and ready for browsing from nearly any point on the globe.