The project has been designed for the Intermedia Arts course, under the mentorship of prof. Dušan Zidar as the subject holder. The group is composed of Danica Rženičnik, Urška Skaza, Tina Zidanšek and Simon Tržan; the latter has created a CNC machine which presents the basis of assessment.

The CNC machine is designed as a “green” printer; instead of an ink, it uses a mixture of soil, water and grass seeds, thus enabling the motives being printed out to grow green in time with proper care. 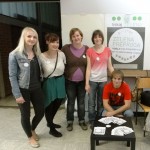 Urška Skaza is finishing her studies of Fine Arts Pedagogics at the University of Maribor. In her free time, she dedicates herself to painting on canvas.

Tina Zidanšek has already participated at some exhibitions and contests and is in her final year of Fine Arts Pedagogics studies at the Faculty of Education Maribor.

Danica Rženičnik is about to finish her studies of Fine Arts Pedagogics at the University of Maribor. She is a member of ZPM –Friends of Youth Association Mozirje, which organizes fine arts workshops for children on a monthly basis. She is also active in the Lepa Njiva cultural association.

Maja Petek is finishing studies of Fine Arts Pedagogics at Maribor’s University. She has presented her works, namely Open Space Exhibition and Privacy in a Space, at the meeting of Youth for Progress of Maribor as well as at the Eureka – Innovation of Youth Contest. Both of her projects received an award.

Simon Tržan graduated at the Faculty of Electrical Engineering and Computer Science in Maribor, at the Department of Automatics. He took part in competition Young researchers for the development of Šaleška valley and in Robot2004 and Robot2010 Contests, where he took first place on both occasions.